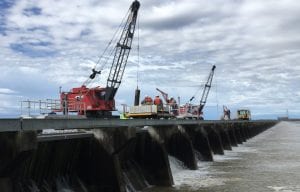 The lingering effects of the 2019 record floodwaters on Louisiana’s aquatic life continue to be measured by the Louisiana Department of Wildlife and Fisheries.  The Mississippi River remained above flood stage for a historic length of time, with records dating back to 1900.  Additionally, local rainfall also impacted other drainages.  Although rivers are finally returning to seasonal levels, the state is still feeling the effects in some of its fisheries, according to the Department.

You may remember the Bonnet Carré Spillway had been opened an unprecedented two times this year for a total of 123 days. Furthermore, flooding in the Atchafalaya Basin and other areas continued into August. Statewide biological sampling continues to indicate a notable reduction in the availability of oysters, shrimp, crab and finfish in those waterways.

The Effects Are Devastating

Results of Departmental monitoring of oysters on public reefs using data available as of August 31, 2019 show that oyster mortality on those reefs ranged as high as 100 percent in several areas across the state.

Statewide volume and value of brown shrimp landings were down 34 percent and 44 percent, respectively when compared to the five-year average. White shrimp fared slightly better with landings up 2 percent overall.

Commercial blue crab landings have decreased across the state in all basins, with declines ranging from 14 to 84 percent in individual basins.

Concerning finfish, the most recent data show that commercial black drum landings are down by 51 percent in the Vermilion/Atchafalaya Basin. Department sampling also indicates the catch per unit effort of spotted seatrout was 66 percent below average in the Vermilion/Atchafalaya Basin and 50 percent below average in the Pontchartrain Basin.

To date, measurable negative impacts on the state’s freshwater fisheries are minimal. Fish kills, resulting from low oxygen levels in the water, may become more common until the water temperatures cool in the fall.

This information is available here. LDWF personnel continue to monitor salinities as well as abundance of fish and shellfish in all the major estuaries of the coast.

This blow to the coast’s fisheries is expected to be felt for some time, the department predicts. They say extent of damages cannot be fully determined until a 12-month evaluation is completed. Once the required data analysis is completed, it will be submitted to NOAA Fisheries for its inspection. To be considered for a federal fisheries disaster declaration, economic and/or fisheries resources losses must reach 35 percent over a 12-month period as compared to recent baseline conditions.

At Wilco Marsh Buggies, we pride ourselves on producing the highest quality, most reliable amphibious equipment and replacement parts. Our equipment is best suited for coastal restoration!  With our 50 plus years of combined experience as Wilco Marsh Buggies, rest assured when you receive your order, it will exceed your expectations.  Contact us to learn more about our equipment and inventory by calling Toll Free at (877) 311-0727 or by calling us locally at (337) 233-3511.

Land or sea, we can get the job done!